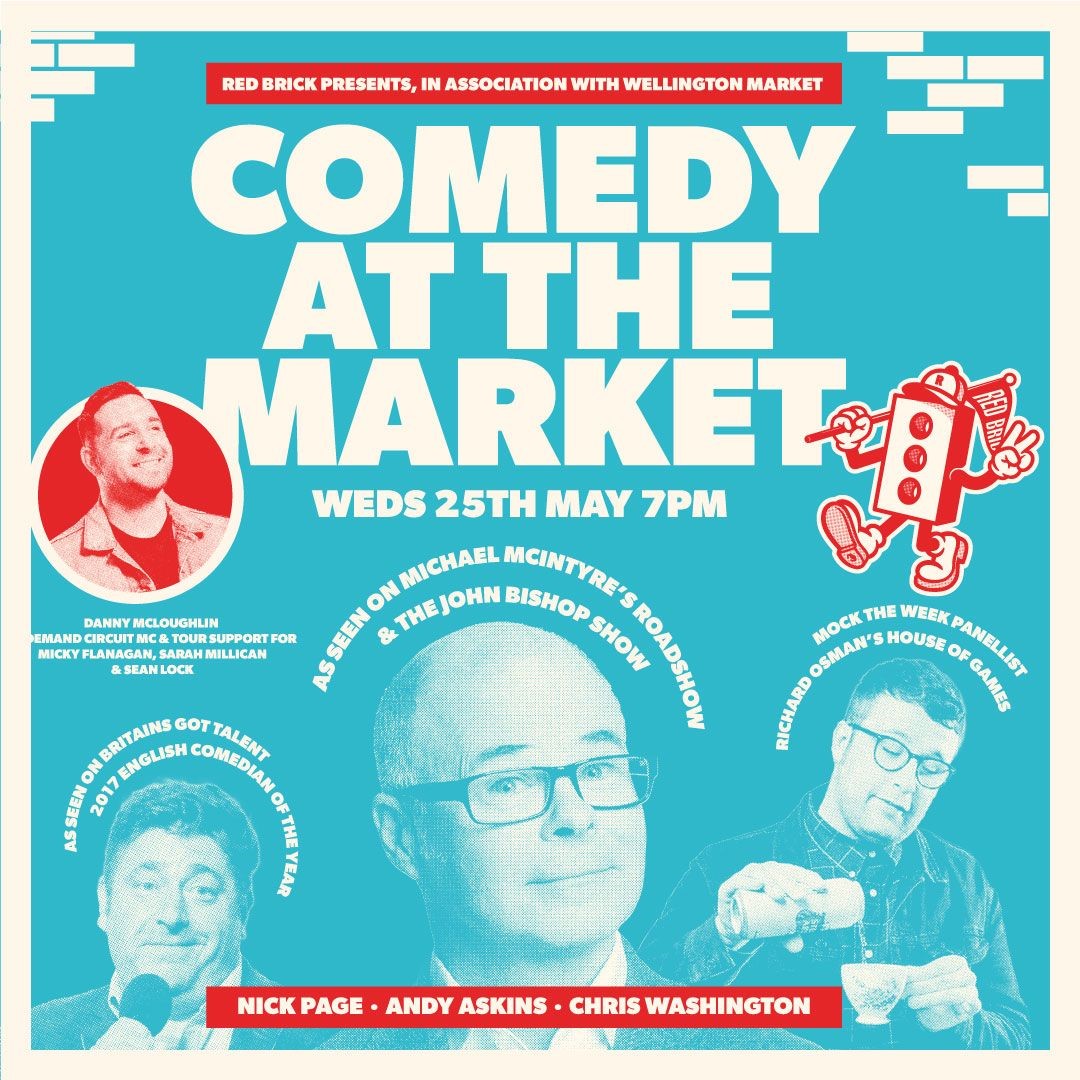 Comedy at the Market

COMEDY AT THE MARKET

Red Brick is excited to present to you, the first of many, live stand up comedy nights at Wellington Market. This 100 cap venue will transform into an outside Comedy Store and play host to some of the UK’s top comedians. The first Comedy at the Market event will see the following line up;

Andy Askins tops the bill, Andy is one of the most sought after headline acts around the world, he has appeared on The John Bishop Show, Micheal McIntyre’s Roadshow and The World Stands Up.

Chris Washington is someone you may have seen before, he’s been a panelist on Mock the Week (BBC), a regular on The Stand Up Sketch Show (ITV) and a guest Richard Osman’s House of Games (BBC). With a cheeky Northern charm and hilarious tales it’s clear to see why Chris is flying up the comedy ladder.

Nick Page was featured on Britains Got Talent along with picking up the English Comedian of the year award. His shows are bursting with stories from a life lived on the edge of (self inflicted) disaster. The Guardian Newspaper described him as ‘ A bear like man with a host of barely believable stories about life, love and brushes with the law’.

Danny McLoughlin is your MC for the night! Danny has the sharp wit & material, likeable persona and strong stage presence that have seen him become a much sought after act in his short time as a stand up. Danny has supported a number of high profile acts on tour including;, Micky Flanagan, Sarah Millican, Doc Brown and Sean Lock. He’s also appeared on Al Murray’s ‘One Night Stand’ (Dave) and the ‘Premier League Show’ (BBC Two). Recently Danny has took to the radio waves to co-host one of Jason Manford’s Sunday morning shows for Absolute Radio.

Red Brick is a newly opened coffeeshop/bar located in the outside part of Wellington Market. Taking a lot of inspiration from the city, by day we’re a brunch hotspot serving Fresh Coffee, Bagels, Pancakes & Craft Beer. By night we’re bringing you events and a bit of that city style nightlife in the way of Live Music, Stand Up Comedy & more! Follow us on social media to keep up to date.